As the new Blood Angel Army Champion, I thought I would playtest my new proposal – teleporting assault marines! Will I be able to demonstrate the shock and awe of the Blood Angels assault with this change?

The start of the game. Units and objectives are marked. 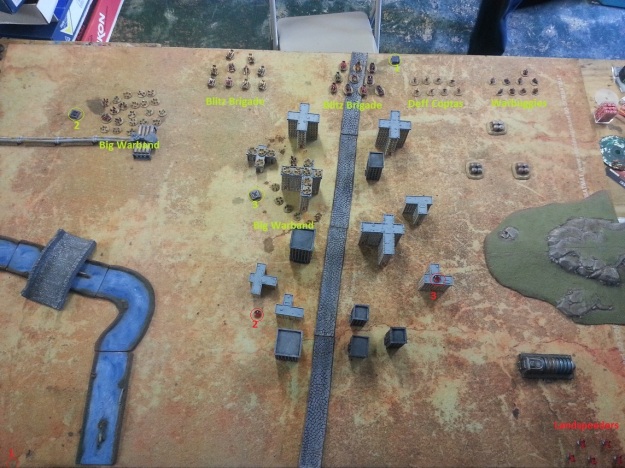 For their first activation, the Marines put the Thunderbolts on CAP 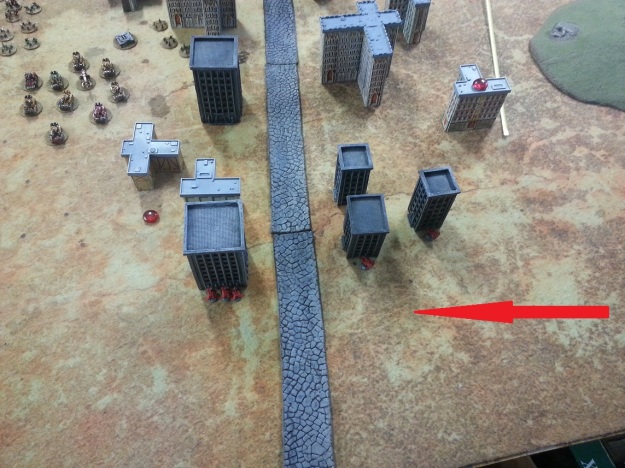 The Blood Angels have no more activations.  The garrisoned Ork warband advances and captures another Blood Angel objective. 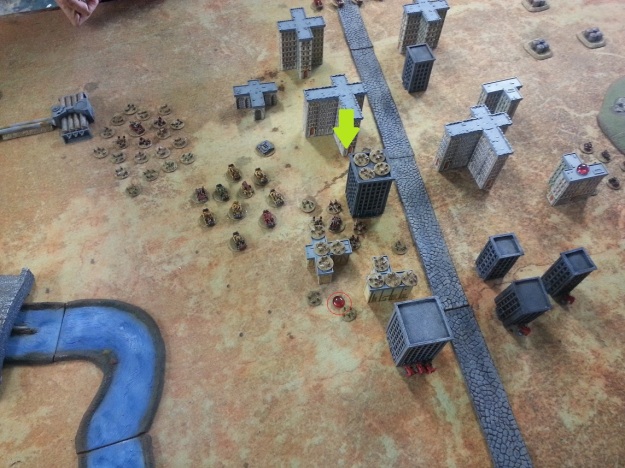 The Ork Fightas attempt to strafe the Landspeeders, but they are intercepted and forced to jink.  One Fighta goes down.

A very short turn.  This is the state of things at the end of Turn 1.  The Orks are in control of two Blood Angel objectives. 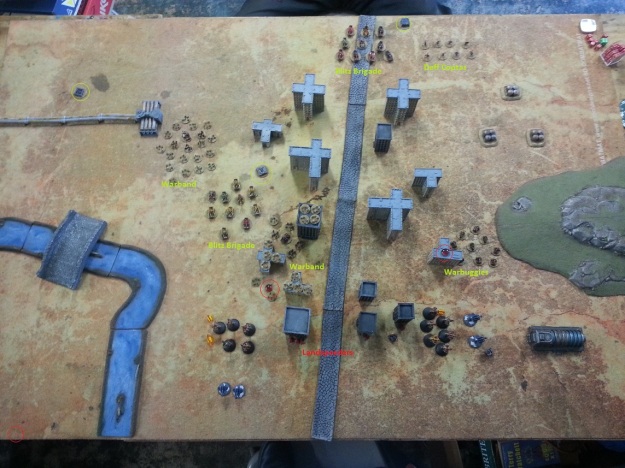 Teleport time!  Two Blood Angel Assault formations drop from high altitude onto the battlefield.  One takes a blast marker on the way in.  Terminators appear from nowhere to threaten the Blitz Brigade protecting the Ork Blitz objective. 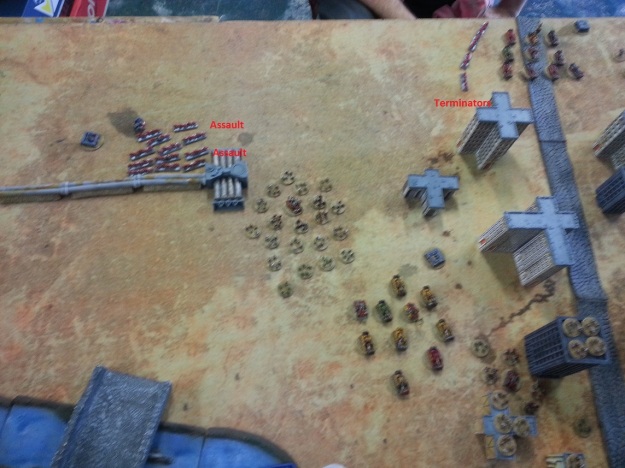 Marines win the roll to go first, and the Blood Angel captain calls a combined assault against the Big Ork Warhorde.

Furious battle ensues.  The Ork Horde is nearly wiped out, but the marines take heavy casualties in return, losing seven out of twelve stands. 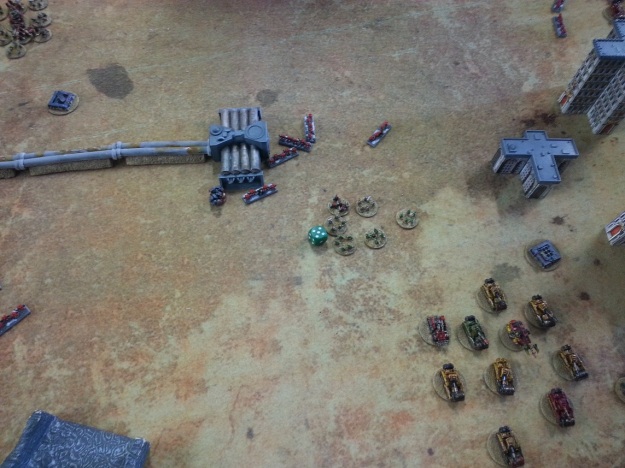 In a hot-headed move, the marines retain the initiative and assault the Ork Blitz Brigade with their Terminator formation. 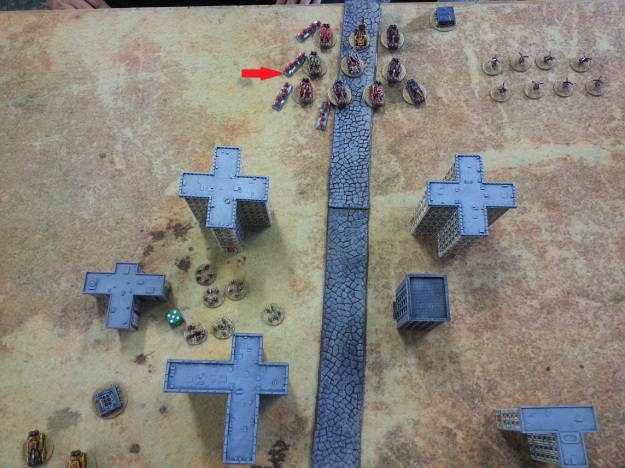 The Terminators break the Blitz Brigade, but it is a Pyrrhic victory.  The Terminators are wiped out.  Orks capture the Break Their Spirit Objective. 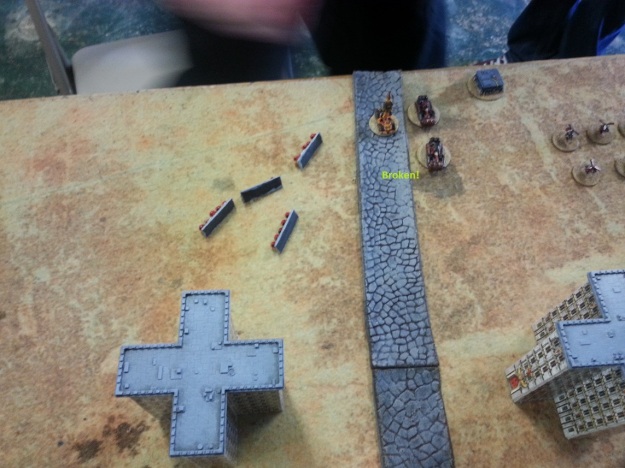 Ork Fightas fly in and break the marine assault formation. 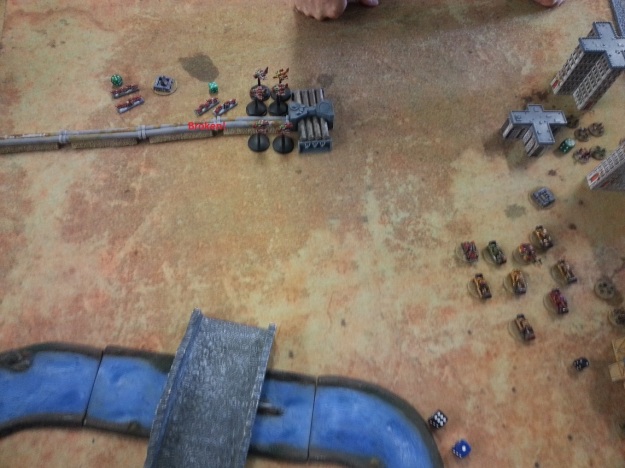 The Landspeeders double to fire upon the Warbuggies holding onto the Blood Angel objective.  They only manage to kill one.

The second Skwadron of Ork Fightas fails its initiative check. 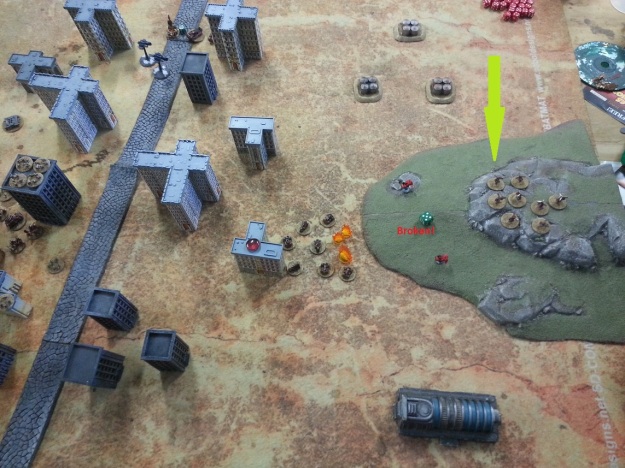 The second Thunderbolt formation fails to activates and stays in the box of shame. 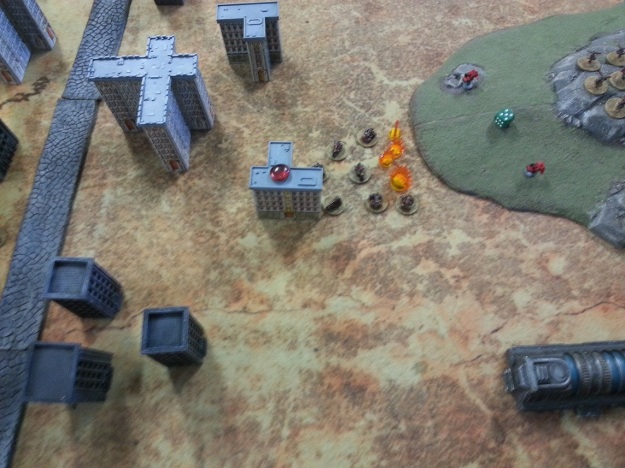 They elect to regroup and clear all blast markers. 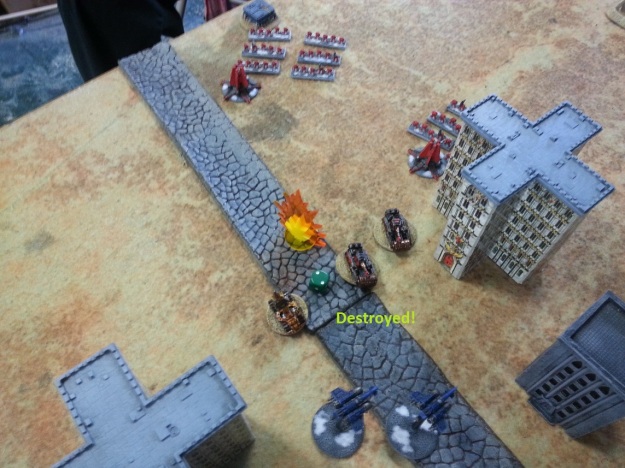 The orbital bombardment preceding the drop pod assault only manages to spook a couple of Orks.

The Tactical formation camping the Ork Blitz go on overwatch.

The Ork Landa strafes a broken assault marine formation and destroys it. 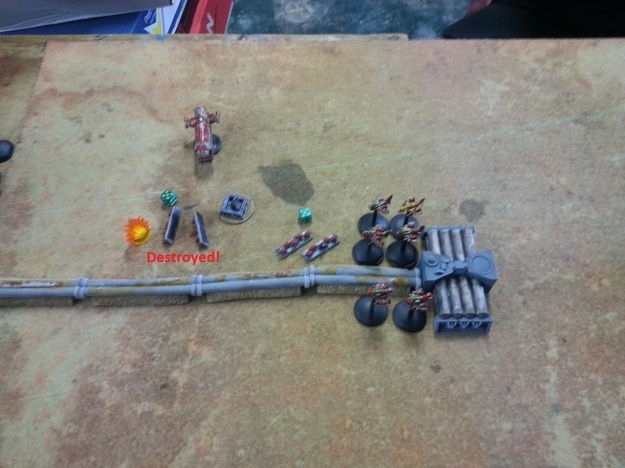 The tacticals that arrived via drop pod sustain fire on the Ork warbuggies, but only kill one.

The end of Turn 2.  The Blood Angels control the Ork Blitz, while the Orks control two Blood Angel objectives claiming take and hold.  Both sides have the Break Their Spirit objective. The marines are significantly outnumbered. 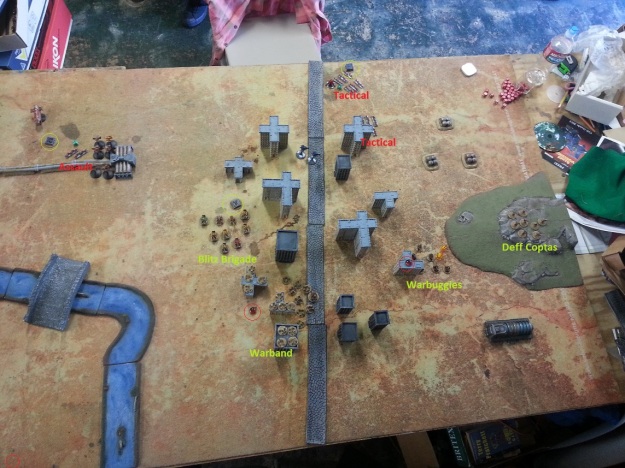 But not for long!  A Fighta Skwadron flies in and crushes them.

Marines retain and the other Thunderbolt formation strafes the warbuggies, breaking them and taking control of the BA objective out of Ork hands.

The Ork warband goes on overwatch.

Blood Angel tacticals go on overwatch and continue to camp the Ork Blitz.

An Ork Blitz Brigade doubles to contest the Ork Blitz.  They eat heavy overwatch fire on the way in.  The marines kill three vehicles, just one blast marker shy of breaking the formation.  The Ork Blitz is now contested. 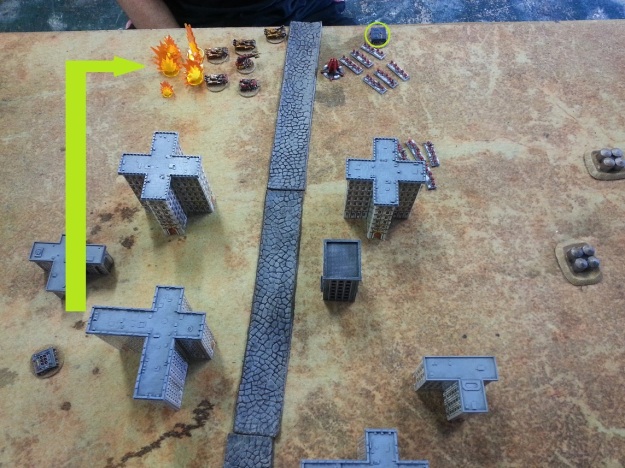 The situation for the Space Marines is dire.  It is Turn 3, and the Orks now have Take and Hold and Break Their Spirit, while the marines only have Break Their Spirit.  In a single activation, the marines swing the momentum in the other direction.  The Thunderhawk calls a ground attack on the Blitz Brigade and breaks it, bringing control of the Ork Blitz back into Blood Angel hands.  At the same time, it disembarks a Devastator formation onto an Ork Objective.  The Blood Angles now have Blitz, Take and Hold, and Break their Spirit.

An Ork Fighta Skwadron tries to destroy the Devastators, but only kill one stand. 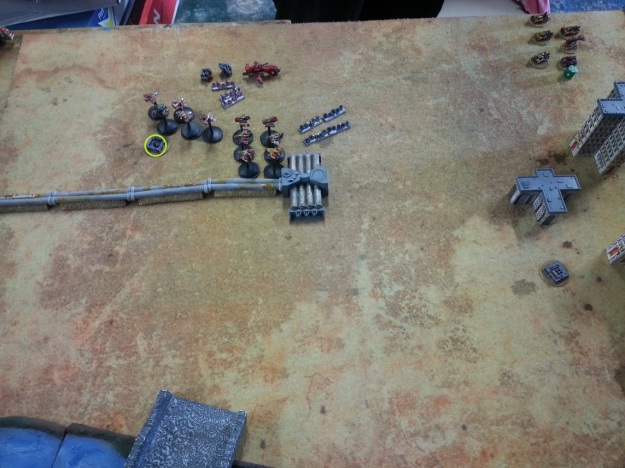 The Ork Landa declares an Air Assault.  Thunderbolts intercept but only put one damage counter on the Landa.  The Big Warband easily destroys the remaining three Devastator stands.  The Blood Angels lose Take and Hold.

The end of Turn 3 and the game is tied.  The Blood Angels have the Blitz and BTS objective, the Orks have Take and Hold and BTS.  The Space Marines are hanging on by a thread, with only two Tactical formations and the Death Company on the ground.

Tacticals march and occupy a building, capturing an Ork objective.  The Blood Angels have Take and Hold again.

An Ork Warband spreads out and manages to come within control range of three objectives!  They contest the Ork objective that the Angels just captured.  Game still tied. 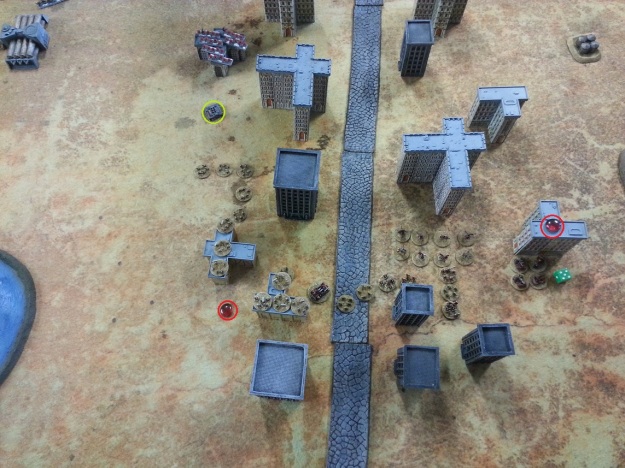 Thunderbolts fly in and try to knock the Warband off of the objectives.  They inflict one casualty.  Not enough.

The Death Company marches across the battlefield and contests the Blood Angel Objective.  Orks lose Take and Hold.

The second Fighta Skwadron strafes the Marine Tactical formation on the Blitz, but fails to kill a stand! 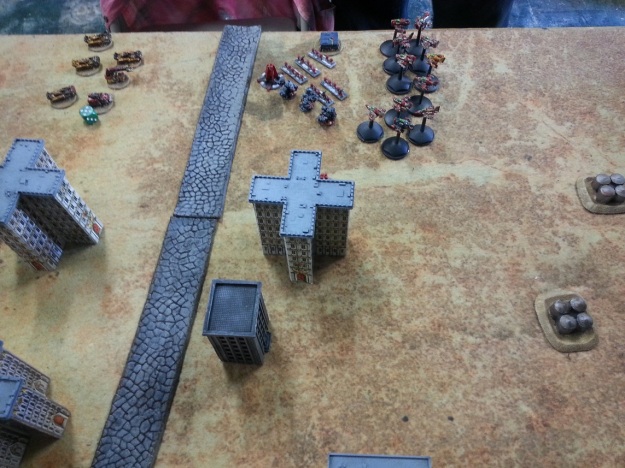 An Ork Warband doubles and opens fire on the Space Marine Tactical formation contesting the Ork objective, and kills one stand.

The second Thunderbolt squadron strafes the Ork Warband, nearly knocking them off the objective.  One stand of Orks (arguably) remains within 15cm. 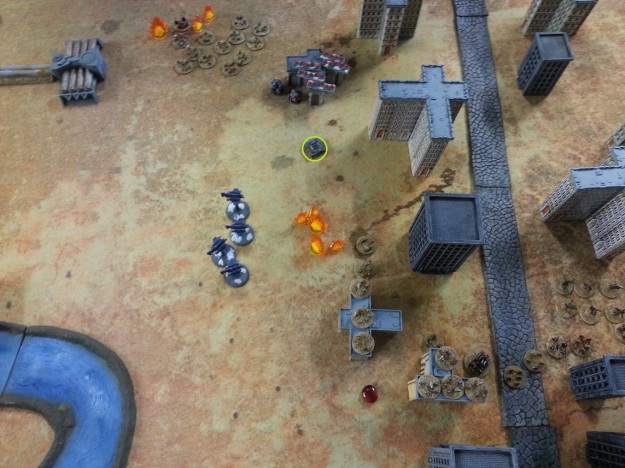 The Deff Coptas fly up to contest the Blitz Objective.  They eat overwatch fire on the way in, but none of them go down!  The Ork Blitz is contested.  Both the Marines and the Orks only have BTS at this point.  The game is tied. 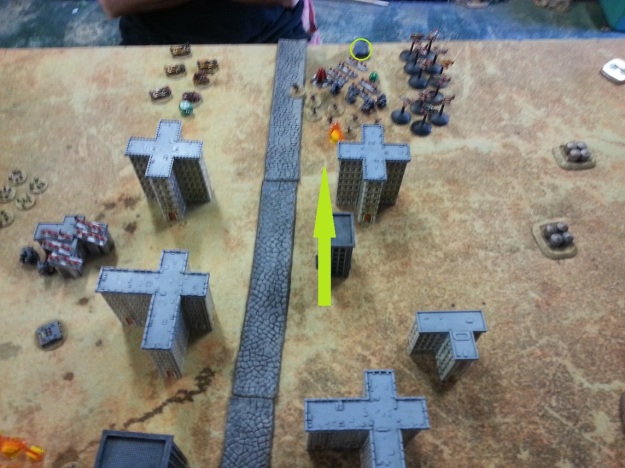 The Thunderhawk comes in and strafes the warband, killing many stands.  The Warband is now definitively knocked off of the Objective.

The Ork Landa swoops in to contest the Objective.

What a great game.  Back and forth, back and forth.  Absolutely grueling, however.  By turn 4, neither of us were thinking straight.  The back and forth over that one Ork objective late in Turn 4 was probably moot at that point.  It had been a long battle.

First and foremost, I think the teleporting assault marines made a GREAT addition to the list. It wasn’t so much that they were effective, but they were fun and thematic.  Blood Angels are all about the shock and awe blitzkrieg assault, and nothing says in your face like a bunch of frothing assault marines dropping in on your backline.

From a list balance standpoint, neither I nor my opponent found the capability imbalancing.  In fact, one of my major complaints about the Blood Angel list has been that it is nearly impossible to capture the BTS objective with our lack of tools.  However, as you can see from this battle report, teleporting the assault marines in and calling a combined assault is what enabled me to break the Ork BTS and ultimately destroy it.

I still felt as though I was playing Epic on Hard Mode with the Blood Angel list, but, being able to capture the BTS objective kept me in the fight long enough to have a fighting chance.  I still think the list needs work, but this is a fun, exciting, and balancing step in the right direction.

Thunderbolts are a unit I normally will add as an afterthought, but, I really liked the flexibility that having two formations offered me.  It can be tough to cover the entire table with Blood Angels, however, with the Thunderbolts, you can reach out and hurt someone anywhere on the board.  However, are those 350 points better spent on boots on the ground?  Maybe.  Especially considering I had precious few units capable of grabbing objectives.  Will have to give this some thought.

The Ork player really played a masterpiece of a game.  Feinting, grabbing objectives, attacking the right units.  He had some bad luck on a couple of key rolls in the game, specifically when he sent so many Fightas at my tactical squad camping the Blitz and only killed one stand.  With all of the firepower he sent at that unit, under normal luck conditions, I think it would have been broken.

Great game, lots of fun, and lots of great material for list development!